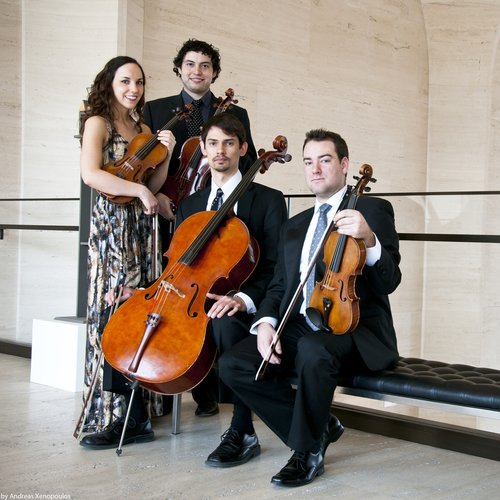 On March 24, The Skyros Quartet will join our four training orchestras to perform at Meany Hall.

About the Skyros Quartet

The Skyros Quartet has performed extensively, traveling around Asia and North America. In their hometown of Seattle, the quartet has concertized at Benaroya Hall as part of the Seattle Chamber Music Society, has been featured artists numerous times at Resonance at Soma Towers, and are seen in frequent performance around the Puget Sound region. They have been heard at the Aspen Music Festival and School (Aspen, Colorado) and the Sunflower Music Festival (Topeka, Kansas). In 2014, Skyros was invited to Ontario, Canada, where they were guest artists at QuartetFest 2014 at Sir Wilfrid Laurier University (Waterloo, Ontario) and performed at the Kitchener-Waterloo Chamber Music Society (Ontario, Canada). In 2013, Skyros toured China as part of an official delegation from the University of Nebraska system, performing in Xi’an and Hangzhou. Skyros also received a Hixson-Lied Student Presentation of Scholarly/Creative Activity Grant to tour the Pacific Northwest and later in 2013, appeared at the Deer Valley Music Festival Emerging Quartets and Composers Program (Park City, Utah).

The Skyros Quartet is passionate about educating future generations of chamber musicians. Skyros has led chamber music masterclasses at institutions such as Seattle University, the University of Victoria, and Central Washington University. In 2017, members of Skyros were appointed as artistic-directors of Tuned In! Summer Student Festival, a week-long chamber music camp for middle school, high school, and college students in Seattle. Skyros will return to Catalina Mountains outside Tucson, Arizona for a second year in July 2017 to coach and lead masterclasses at Tucson Junior Strings’ Chamber Music in the Mountains. Skyros members are currently string principals with the Seattle Collaborative Orchestra, a wonderful mentoring orchestra and violinist Sarah Pizzichemi is a Seattle Youth Symphony Orchestra alumni.

About the March 24 Concert:

As a special 75th anniversary event, Prelude, Symphonette, Debut, and Junior orchestras team up with The Skyros Quartet, a staple of the Seattle classical music scene, and Seattle Repertory Jazz Orchestra for an afternoon that will spectacularly blend symphonic music and jazz.